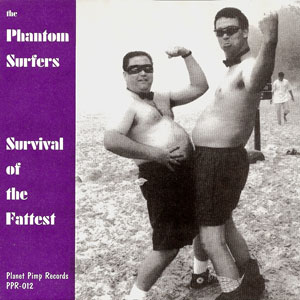 (PPR-012 | 1995) This is Phantom Surfers first Planet Pimp 7"er, "Fuck Surf Music". The album is a collection of live on stage banter and the first couple of seconds of a few songs. Basically, it’s a live Phantom Surfers show with no music. At the time this came out, the post-Pulp Fiction surf revival was in full swing and I am sure there were a few surf music noobies who bought this thinking they were getting two-sides of reverb drenched music-a fact not lost upon the band judging from their complaint postcard which they included.

The B-side contains an incredible Comfy Jones prank phone call to Dick Dale. Here’s a little backstory regarding the prank call from an L.A. Record interview:

You guys did a single years ago where the B-side was a phone prank on Dick Dale. Did he ever find out it was you guys?

Mike: Yes and no. We got a call from someone claiming to be his lawyer who was asking about that and about the fake Crown album, The Phantom Surfers and Dick Dale. But he was so confused about both the items that nothing ever came of it. Dick Dale was under the impression that he had recorded with us on that Dick Dale Crown album, but they were public domain tracks that have been used and reused time and again.

Mel: I actually have a video of him signing that LP with me, and he didn’t notice!

Did you ever play with him on the same stage after that?

Mel: I played with Dick in Anaheim with Nokie Edwards of the Ventures in 2003. It was the first time they had met, and it was pretty great. Funny and great. He brought one of his tiger cubs, and you should have seen the audience’s reaction. When he played the intro to Survivor’s ‘Eye of The Tiger,’ the place went wild!

Now I think I’m the one being phone pranked!

Mike: About the funny phone call, we said ‘Oh, you have to contact Planet Pimp Records.’ I told the lawyer it was an actor we hired to portray Dick Dale. I’m certain that being Dick Dale’s lawyer, he was already sufficiently confused that it wasn’t too hard for him to just say, ‘Fuck it.’ It’s an abject lesson in the nature of reality. Who knows what is real?

Do you think putting this in print now is going to get you guys in legal tangles all over again?

Mayuzzz: Just be sure you spell our names right!

Miiiiicke: We actually got a book coming out called Rock Stardom for Dumb Shits. It’s a humor book, but it’s also about everything anyone need to know about the rock industry. And we have a wonderful appendix in it about our legal struggles with Lookout! Records.