Neil Hamburger - Bartender the Laugh’s on Me!!!! 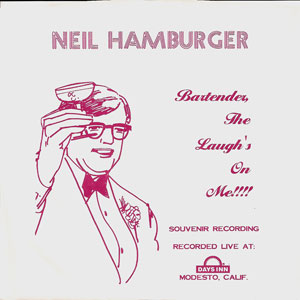 (PPR-013 | 1995) Bartender the Laugh’s On Me!!!! is Neil Hamburger’s (America’s Funnyman) second single and it showcases Mr. Hamburger in true form. It was recorded live in Modesto, CA and the recording captures the thrills and energy that come from a live Neil Hamburger show. This release features Neil’s take on religion, birth, and the O.J. trial. While dodging hecklers, Neil barely fumbles his way through each punchline...but, you see, that’s the point. The final track, Judge Ito, mainly consists of Neil dealing with a microphone feedback. This is anti-humor at its finest.

These early Hamburger singles and his first three LPs are great. As of late, Neil Hamburger has lost a little bit of this charm. He has become less of a parody of stand-up comedy and has morphed into a typical SNL-like character whose schtick is that of a tasteless insult comic. He is still wildly funny at times, but for different reasons.