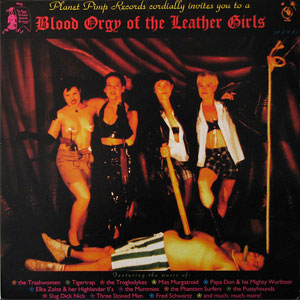 This record demonstrates one of the problems with having a "joke" label like Planet Pimp. All of the off-the-wall antics one might expect from a Planet Pimp release are there—prank Calls, crude humor, etc. But on the back of the record it also includes some words from Mededith Lucas’ brother Michael, of the Phantom Surfers. It is basically a sort of eulogy to his sister, who apparently committed suicide when her film failed to get a distribution deal. Very serious stuff. The problem is that, when you first start to read the passage, you assume it’s a joke—perhaps an inside reference to the plot of the movie itself (which I, regrettably, have never seen). It’s only after a while that it sinks in that this is probably an honest and sincere homage to a lost family member. It struck me as a bit out-of-place, but, then again, I did not know Meredith Lucas and perhaps the context of her brother’s words was completely in keeping with her character and sense of humor.

UPDATE: A reader e-mailed me and informed me that the movie was actually directed by Mike Lucas and he added the fake eulogy (Merideth Lucas never existed), because he was a bit embarrassed to release it under his name. I haven’t verified this info, but, if true, I think it’s great that I was fooled by this.

UPDATE OF THE UPDATE: Another helpful reader has clarified this a bit more for me. Lucas wasn’t embarrassed by the film. In Lucas’s words, "the film was attributed to women in hopes that it would be taken as a sufficiently serious, though rather muddled, feminist statement." Read the full interview of Michael Lucas from Waldfield’s Corner for tons more information about the film.

Around my house, Slug Dick Nick’s "Feed Me.." poetry bit is one of the most quotable sections of the record ("I’m a wet turd humming bird flapping at the crack of your ass!"), and the record is filled with other catch phrases which, which if memorized and rehearsed, will make you the comic hit at your next office party, sports outing, or church basement Bunko tournament! Oh, and the music is quite good too.

Clips from the Film

Below are a couple of clips from the film. There aren't many clips floating around, but these will give you a feel for the quality of the movie. At one point someone had posted the entire movie on DailyMotion but I can't find it anymore. Sorry, this is what you get:

After all these years, in 2019 I finally had a chance to watch Blood Orgy and it is about what I expected. It's amateurish and at times incoherent but there are a handful of moments that make a viewing worthwhile. Fans of the barely-related soundtrack will enjoy seeing their favorite lines of dialogue in context. However, most of the music on the soundtrack is not actually in the film. Instead, there are plenty of 60s garage rock originals which they probably never got the rights to use. This is punk rock film making and as such is definitely not for everyone, but it's a must-see for Planet Pimp fans.