The Go-Nuts - The Donut Prince and the Pauper 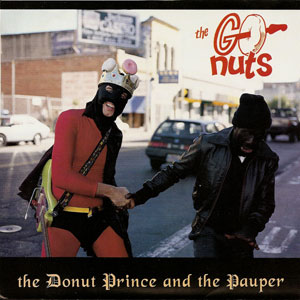 (PPR-016 | 1995) The hottest band on Planet Pimp Records probably was The Go-Nuts. The Go-Nuts are the worlds greastest Snack-Rock Superhero and Gorrilla Entertainment revue. Their first P.P. single, The Donut Prince and the Pauper, shows off a revamped and cleaner sounding band than featured on earlier Go-Nuts releases. It contains four versions of "The Fabulous Go-Nuts Theme" and two other snak-rockin' songs. This single boasts a great cover featuring The Donut Prince, in full Go-Nut superhero garb, shaking hands with a demented-looking street person. All the band members all wear superhero costumes to hide their true identities—although you never see the Go-Nuts and the Phantom Surfers or The Untamed Youth in the same room at once...hmmm. 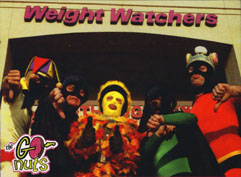 This (website) is some whacked, snaked shit. Two twinkies up."