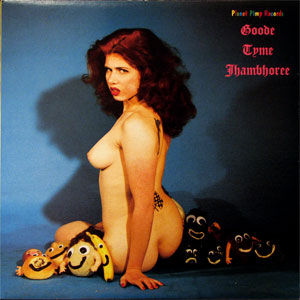 The record’s main theme seems to revolve around the googly-eyed foodstuffs in Mollie Stone’s grocery store: Benny Bagleman, Mr. Banana, Henrietta Hotdog and more. For the longest time, I didn’t have the foggiest notion as to what the joke is all about, but I found it hilariously facinating nonetheless. I wasn’t even sure if Mollie Stone’s is a real place or not. But it doesn’t matter, there are other thematic currents that have been woven into the narrative which may apeal to one’s pallette. The message of the first side is, "Don’t do drugs!" and the other side is recycling. 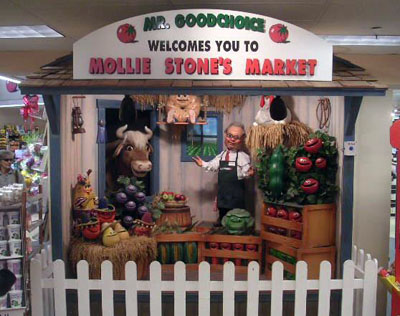 Recently, however, I have scraped together a little more information about the allusive Mollie Stone. Thank you Internet, your wonders never cease to amaze me. Turns out, Mollie Stone’s Market is a real grocery store in the Bay area. Apparently what sets it apart, besides its high prices, is a little animatronic display in their produce section. Shoppers can press a button and are given a robot vegetable show. As you can see from the photo I stole from another Web site, all the characters from the record are there. Hey, there’s Benny the Bagel Man and Mr. Goodchoice looks like he is the M.C. The Jhambhoree makes a little more narrative sense in this light—the secret, afterhours life of these degenerate fruits and vegetables . If I ever visit San Francisco I will have to make a point to check out the show and pick up some cabbage.

Back to the record itself, The Planet Pimp Records Good Tyme Jhambhoree is a collection of 20 tracks by many Planet Pimp regulars including Los Kogars, Neil Hamburger, Slug Dick Nick, and David Nudelman. David Nudelman does a great version of the Beach Boys Vegetables and the Hi-Fives and Man or Astroman? contribute some good songs too. Slug Dick Nick is interspersed here and there and given a few seconds lay on the filthy language. The PSA’s are on parade here with "Don’t Do Drugs" on side one and Deke Dickerson’s "The Recycle Hoedown" on the second side.

The centerpiece of the second side is a Comfy Jones prank call to The Car Thieves, who were, apparently, none-too-pleased with the treatment Sven gave their music. The story behind all this is that Sven contacted The Car Thieves to make a record. They said, "Sure!" and Planet Pimp can provide the cover art, "Just don’t make it too gay." In reaction to this comment, we got the Car Thieves’ debut (coming-out, as it were ) single. After goofing on the band members, we are treated to a hand-clapping, Village People style rendition of "Popcorn" by The Original Car Thieves. I have also been told by an aquaintence of Sven that the Car Thieves retaliated with a series of hilarious insulting messages on Sven’s answering machine.

As if that wasn’t enough reason to own this album, you should buy this album if, for nothing else other than the sexy yet creepy photos of the lovely D’Lana Tunnel.