The Lone Surfer and His Super Pals 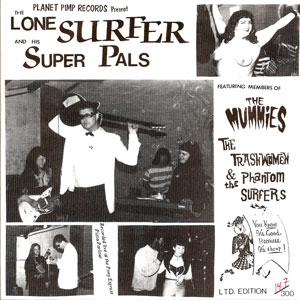 (PPR-003 - 1992) The Lone Surfer and His Super Pals which was a surf super-group comprised of Michael Lucas of The Phantom Surfers, Elka Zolot, Tina "Boom Boom" Lucchesi both from the Trashwomen, and Russell Quan from the Mummies (Eventually he joined The Phantom Surfers as well). This recording is along the line of the Larry Withers & the Mummies single in that audience banter triumphs over the music. It’s mostly Michael Lucas berating a heavy metal guy in the crowd and eventually giving him his money back. Unlike the Phantom Surfers Planet Pimp Single, we get to hear complete versions of the two songs, Horror Beach and Church Key.

The packaging also features the first instance of Planet Pimp’s company logo, "You Know It’s Good Because It’s Cheap!" And, I may be mistaken, but I think every copy of this record was marked 147 out of 300.

There is some backstory behind the audience banter on the record. This blog post from Detailed Twang tells much more of the story and includes reminisces from Michael Lucas in the comments.